In Defence of Donald Trump 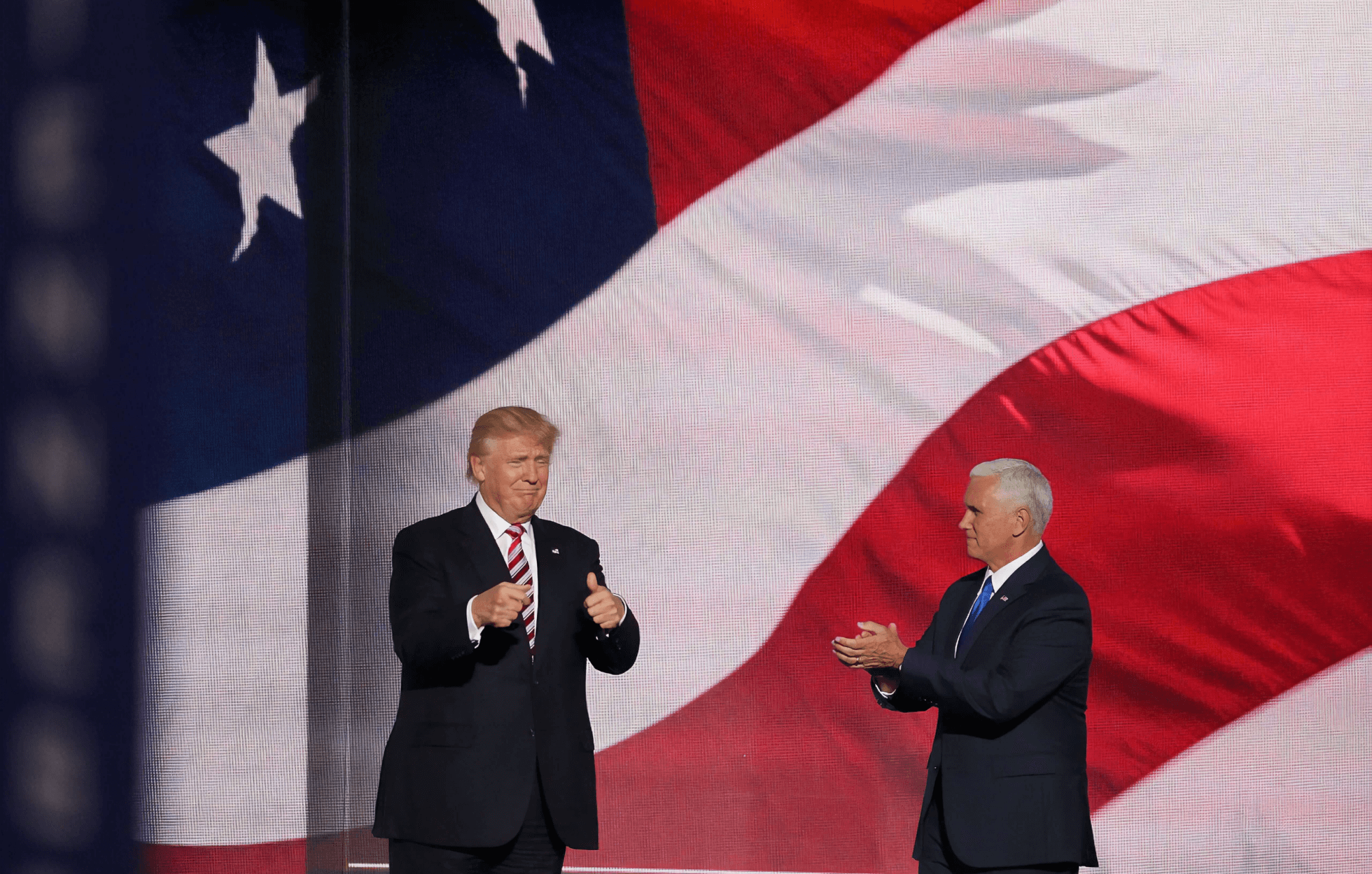 It is a well-known fact that universities all across the Western world espouse increasingly dogmatic and political views. We hear of countless examples of ideologue professors who indoctrinate their students and force them to adhere to their extreme world views. I expected to see precisely that when I enrolled at the Faculty of Arts, and still I was shocked, to a degree, by the blatant anti-Trump rhetoric I encounter on a daily basis. I suppose it’s taken for granted that we all agree with these views. While I’m in no way offended or angry, I do wish to express at length certain things that just cannot be expressed in class, but that nevertheless need to be addressed, lest some people think themselves and their views untouchable. Thus, behold, the heretic cometh with his slimy ways and evil thoughts.

I remember the election night of 2016 as if it were yesterday. We were watching the beauty of the electoral college in action as states turned red or blue and votes went to one candidate and then to the other. The whole world collectively held its breath as it watched the events unfold. Dozens of minutes passed as the votes were being counted, and, for a time, Hillary and Trump stood relatively equally. But then, lo! what is this? Is Trump. . . in the lead? Is he winning? How could this be possible, I thought; all the polls had predicted his spectacular loss. For was he not a terrible bigot, a sexist, an islamophobe, a homophobe, a xenophobe, a racist, white supremacist Nazi who wants to put blacks and Hispanics into concentration camps; and was he not accused of more than three thousand and twenty-five rapes and instances of sexual harassment, and does he not eat deep-fried babies for breakfast, and does he not have an IQ of 75, and, that most horrid sin, is he not also orange in the face?! Surely such a man must lose. Surely only people of similar views and of similar intelligence could vote for this monster.

And yet, against all odds, Donald J. Trump managed to cross that magical boundary of 270 electoral votes and become the 45th president of the United States of America. And as I saw the result on screen an uncontrollable wide smile appeared on my face and my heart was filled with joy and the room with spontaneous cheers and laughter. My friends and I hugged in celebration and all our hearts were filled with disbelief. We won. None of us expected it, but we won; and for that reason the victory was so much sweeter. Yet, in that seminal moment, the fight had just begun.

Let me reassure you that I in no way endorse or support every single thing that the scary orange man says or does. In fact, I’m very amused by his simplistic speech and silly goofs. He’s clumsy and imperfect and shoots words from the hip. He takes credit for things he didn’t do, sometimes even outright lies, and his decorum is hardly that of Churchill or Thatcher. However, what we often seem to forget is that when we elect a president, we aren’t electing a friend or a spouse—we’re electing a policy maker. Thus, despite all his personal imperfections, we ought to focus on such issues as crime and disorder statistics, on jobs and the GDP, trade, nuclear deals with Iran, handling of immigration and responses to terrorism. The only way to evaluate his performance is to focus on these matters, for every silly moment will eventually be forgotten, but the effects of the laws he passes and policies he enacts are going to be felt for generations.

But that, of course, is all too technical and factual and boring. That would mean we’d actually have to educate ourselves and read and learn and then discuss. How much easier it is to just insult! Where are the juicy scandals, I hear you ask, and where are the mean tweets? Forget the important things; we want to hear more about how evil the orange man is!

What I find so incredibly amazing is just how easy it is to refute the many insults and false accusations thrown at Mr. Trump on a daily basis. It has become almost an established religion to shower him with every “–ism” one can think of, and by extension, accuse his supporters of those same sins.

I remember hearing about Donald Trump’s candidacy for the first time in early 2016. I initially believed the childish mockery and the slander, but, being curious, I opened YouTube, typed in “Donald Trump speeches” and started listening to them – for what better way to listen to this bigotry than from the man himself? But after ten, twenty, and sixty minutes, and then after hours and dozens of videos under my belt I was still unsatisfied. Where were the sexism and the racism? I certainly couldn’t seem to find it. And where was any concentration camp talk, or anything remotely white supremacist? Yes, he spoke of dangers of mass illegal immigration, the issues of crime that are brought with it, but that’s, at least to a degree, just factually correct and incontestable, as well as easily accessible online. That is to say, it is unavoidable that illegal immigrants commit crime, and even just one may be too much to some people. Immoral acts caused by the native population are to an extent unavoidable, whereas immigrants’ crimes most certainly can be by just not letting them enter in the first place. That’s what Trump tried to express. In that sense facts can’t be racist, and even if they may be abused for racist purposes, they still must be shown to the public. Trump, as I discovered, also never mocked a disabled reporter. In fact, it takes about five seconds to google clips of him mocking other people, including himself, in that same exact way – waving his limp hands and opening the mouth so as to ridicule. But, of course, why would anyone wish to google something that is going to ruin their fantasies?

How Trump hates blacks is still a mystery to me. From what I can tell, he has been working with black people his entire life, has many black acquaintances and seems to have a genuine concern for the well-being of all African Americans, their horrendous crime rates and poverty levels. It is also interesting to note that Mr. Trump has never before been accused of racism – that is, before he ran against Democrats whose unofficial political slogan these days seems to be “Anyone I disagree with is a Nazi”. Whether Trump’s presidency proves to have a benevolent effect on black communities is yet to be seen, but he certainly doesn’t seem to me as anywhere close to being a white supremacist. Anyone making that outlandish claim would have to show some explicit data to prove that he is (I won’t hold my breath).

Aside from the myriad of “-isms” that Trump is supposed to be, there’s one more accusation that the Left’s mobs seem to love to throw at him on every occasion they can. That is, of course, his supposed lack of intelligence. For of course, what’s better than being smarter than the president himself? You heard it right; you’re smarter than him! Than Trump! Ye mighty student, paragon of intellectual thought; how you spend your days endlessly scrolling through Facebook and Instagram, and how you’ve read a whole five and a half books over the course of your life, and how gallantly you place trust into such reputable sources as CNN, Buzzfeed, and your favourite singer’s Twitter feed. You are smarter than the billionaire personification of the American dream, who fought against the media, the Democratic party, and his own party, and became the president of the most powerful country on Earth. And, oh, I hear you crying that classic line of “but he got a small loan of a million dollars”. How long would it take, would you say, before you wasted such a loan on iPhones, expensive cars and jewellery, alcohol and endless trips to your favourite Chinese restaurant, and vapid excursions to India and Korea? Would you know how to make more millions and even billions out of that small loan? Surely if someone as stupid as Trump could do it, you can too! Again, I won’t hold my breath.

It’s incredible, isn’t it? How so many people are able to indulge in such blatant doublethink and they don’t even see it. On the one side, Trump is a 75-IQ orange monkey who can’t discern his head from his backside, and on the other, he’s an incredibly competent and calculating evil man who’s going to destroy America with his dangerous policies. I, for one, wouldn’t be afraid of Hillary Clinton with Down syndrome – I was fearful of her becoming president precisely because she is so ruthlessly competent. So, which is it? Is Trump at least somewhat competent and dangerous to your utopian dreams, or is he really about as smart as a squashed grape? He can’t be both.

The moral of the story is that most of your issues with Trump are probably either imaginary, trivial, or both. Instead, make the effort to inform yourself about the actually important events and policies coming from his administration and engage them with a healthy measure of respect and logic. He’s no saint, and I myself disagree with many of his decisions and sentiments. However, instead of showering him with petty insults, like a six-year-old would do, I try to engage the issues surrounding him with careful thought and at least some research. What most of his opponents seem to be doing at the moment is a sort of Lovecraftian version of “four legs good, two legs bad” where their nonsensical sentences turn to meaningless words and then to gibberish of syllables and odd noises; and very soon, out of that gibberish comes, first faintly and then with increasing clarity, a chide that goes “Orange man bad” repeated again and again as a substitute to debate— and that chide seems to constitute the whole of their political doctrine.

I urge you to break free of that childlike rhetoric and instead debate the world around you like the adult that you so wish to be. Until you take that intellectual leap, keep in mind that with every tear you cry, and with every empty slur that comes out of your mouth and with every unfunny joke you make, the wall just gets ten feet taller.